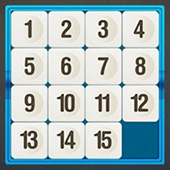 Game 15 is one of the most popular puzzle games in the world. The original version is a set of 15 square chips arranged in a square box. Using an empty cell to move, you need to rearrange the pieces so that they were in order from 1 to 15 from top to bottom. This puzzle was named after the number of pieces in it ("Game 15").

On our site, there are 4 variations of this game with a different field size, including 3x3, 4x4, 5x5 and 6x6. To make the game espeically interesting, pieces of images fromthe jigsaw puzzle section were added to Game 15 puzzle tiles. After collecting the tiles in the correct order, you will also get a picture!

You can also compete in solving Game 15 in speedrun! Your speed is automatically recorded in the ranking if the puzzle is solved in the Speedrun mode, ie, without saving the game and then downloading the saved version!